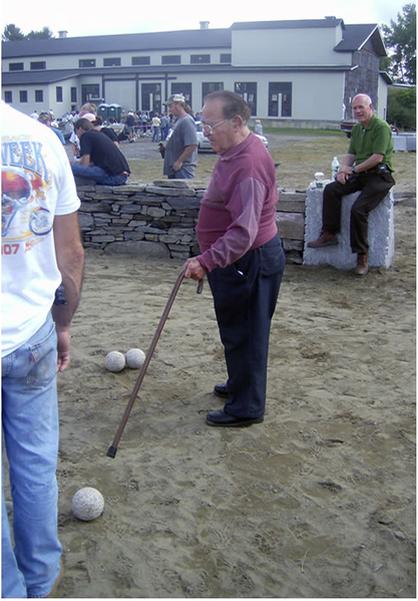 The Greeks had a game called Spheristics which used stone balls; the objective was to throw them as far as possible. Presumably this was the origin of the contemporary •shot put.”

The Romans, history reports, Introduced the concept of the ‘pilot’ or target ball with the objective of trying to get as close as possible to it. Lithobolos is a Roman word meaning •stone thrower.” These were catapaults, a type of artillery, and the smallest of the (stone) artillery balls used is said to have weighed about 10 pounds. It is believed these were used in bowling games. Over time the stone balls were replaced by wooden ones.

The Gauls, who had learned the game from the Roman soldiers and sailors, weighted-and armored-the wooden balls by hammering nails into them. This studded version evolved into the steel petanque ball used by the French and Spanish today. The Italians continue to use balls similar to the original wooden ones, usually some sort of composite material.

The Lithobolos balls (lithoboli?) that we used In our adaptation of the ancient game are granite spheres about five and a half inches in diameter and weigh about 10 pounds.

They were custom made In China and shipped to the Island of Mallorca in Spain for use at STONEWORK SYMPOSIUM 2007. Unfortunately they were he ld up in customs and did not arrive until the Symposium was over. This year they were shipped to Barre, where the well-travelled balls could finally be put into play at the first-Ever Lithic Olympics during the Granite Festival which followed the Symposium on the Bocce court that had been constructed by the Ory Stone Walling Workshop preceding the Symposi um.

right: Vince Illuzi, one of Barre’s respected elder carvers, performs the role of Judge as Pat McAfee looks on.