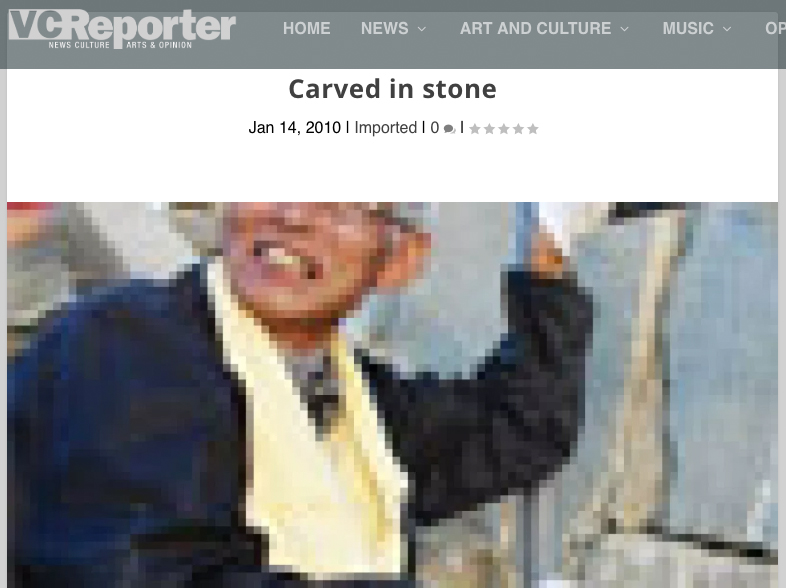 To deny that Ventura is inextricably linked to its Mexican and Spanish roots, from Junipero Serra’s Catholic mission downtown to the majestic statue and hilltop cross bearing the intrepid priest’s name, one has to be living under a rock.

Now, Ventura is adding a bit of the Far East to its vast cultural diversity, courtesy of people who live and work with rocks.

And as seven master stonemasons arrived in town last week, some for the first time ever on U.S. soil, they brought with them years of meticulous Japanese handiwork, passed down from generation to generation; long before those tangible elements associated with San Buenaventura even existed.

Informally, they are called the “Rocknockers.” Formally, they are here to construct two stone rampart-type structures on either side of the stairwell leading down to the inimitable Serra Cross, which overlooks the entire city.

“It’s an acknowledgment of tradition. There’s 10,000 years of human tradition here,” remarks Paul Lindhard, a Ventura artist and founder of Art City. Lindhard was just one of several people on hand last week at Serra Cross Park to assist the visiting stonemasons.

They are led by the father-and-son team of Jyunji and Suminori Awata, the respective 14th and 15th generations of carvers from the Ano-shu guild lineage, whose renown in Japan is owed to the near-invincible construction of medieval castles impervious to earthquake activity.

Those Japanese castles, says Tomas Lipps, who is leading the project through his Stone Foundation, have stood tall for hundreds of years because the careful dry-stone stacking of their walls, minus the use of cement or mortar, is resistant to all sorts of seismic activity — from the smallest tremor to the biggest quake. It’s something that Lindhard likes to call “heritage engineering.”

“It has flexibility to it, so if an earthquake ripples it, it just shakes itself back into place and doesn’t break,” added Lipps. “These gentlemen are masters of the art.”

The geological benefit of building a pair of stone structures from the Ano-shu mold is just one reason why Ventura, known to register on the Richter scale from time to time, was picked for the project.

“We were looking for a site, and the (Serra) cross was the ideal situation,” said Lipps.

Lipps, who hails from New Mexico, said that his participation in a public art project in Pasadena a few years back led him to visit Ventura, where he collaborated with Lindhard and discovered the Serra Cross. He remembered that it seemed like the perfect place for a future art/masonry installation.

However, to kill two birds with one stone — pun intended — Lipps and company figured that with the masons’ trek from Japan, Ventura would ideally be the best place to hold this year’s International Stonework Symposium. It’s a prestigious honor for a global event that has been to places like Majorca, Spain, and Vermont, where rock quarries and stonemasonry are in abundance.

The annual convention, held through next week at the Crowne Plaza Hotel, brings together not only stonemasons, but design and architecture enthusiasts from across the globe, a first for Ventura. It’s hoped that the workshop at the Serra Cross will be complete by the time the symposium begins on Tuesday, Jan. 19.

The Awatas, with other masons from around the country who journeyed to the workshop, arrived at the site last Thursday, “sorting out” the more than 300 tons of sandstone, from boulder to pebble, which was then crushed down to size for the project. Over the weekend and through this week, masons worked from sunrise to sunset erecting the 14-by-14-foot pair of structures.

While the majority of visiting masons found vacancies at the symposium’s host hotel, some carvers, in an effort to conserve time, remained on site and camped out at the park. Others were offered places to sleep and some storage space for their equipment on behalf of members from the Serra Cross Conservancy.

Considering the cost of supplies, stone, trucking, meals and lodging, the conservancy is seeking monetary donations to offset what is estimated at $250,000 incurred from the walling workshop.

“There are so many expenses,” said Barbara Asbell, conservancy member. “We’d like to make it an experience for (the masons) to want to come back.”

For Suminori Awata, who spoke through a translator, the walling workshop is more than just a public art piece, but an expression of Japanese craftsmanship, a cultural bridge between East and West.

“He wants people to learn about Japanese culture,” said his translator, Kentaro Kojimo.

Everything about the project — from the masons’ migration from Asia, to the location and season of the symposium, even the economic climate — indicated that the timing was right, according to Lipps.

But most of all, Lipps hopes that the ano-shu design at the Serra Cross will be utilized in future stone symposiums, and that the completed project will leave a positive imprint on Venturans.

“We’re going to leave something behind that’ll leave everybody happy,” he said.

The International Stonework Symposium is held from Jan. 19 to 23 at the Crowne Plaza, and will include the Stone Foundation’s own “Lithic Olympic Games” involving contests of strength and physical fortitude with stones. For more information on the group’s activities, go to stonefoundation.org. For more on the Serra Cross Conservancy, and to send donations, go to serracrosspark.org or call 648-3008.