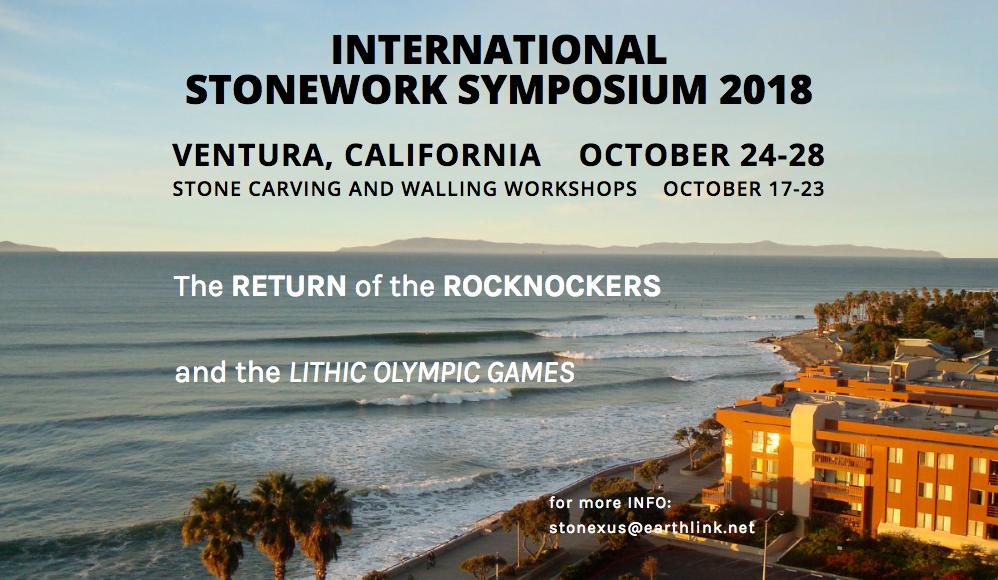 THE 17TH ANNUAL GATHERING OF THE STONE TRIBE

Ventura has been a most excellent venue for these events, readily accessible as it is from airports in Los Angeles and Santa Barbara, with discounted lodging for WORKSHOPS and SYMPOSIUM participants. . . many excellent restaurants. . . the proximity of the sea. . . beach stones to play with. . . and, not least, the fact that rental cars, while a convenience, are not a necessity there—in the old town, where the SYMPOSIUM, the WORKSHOPS and the LITHIC OLYMPIC GAMES will take place, everything is within walking or biking distance.

We are pleased to return to this amiable, art-oriented coastal community and show our support for them after the disastrous fires that occurred there in December. The Ventura community welcomes us as they did before—and the Anacapa Brewing Co. will again produce the excellent ROCKNOCKERS’ ALE in our honor.

SOME HISTORY: Tomas Lipps was the Founder and for fifteen years the Director of the STONE FOUNDATION, a community of stonework enthusiasts. He acted on its behalf, edited its publications, organized its gatherings and secured its place in the stone network.

He gave the STONE FOUNDATION its sovereignty in 2015. It became a Non-Profit 501(c)(3) organization and successfully organized Stonework Symposiums in 2016 and 2017.

Although the STONE FOUNDATION and STONEXUS are separate entities, each supports the other’s activities.

The first 14 INTERNATIONAL STONEWORK SYMPOSIUMS and associated WORKSHOPS were organized by Tomas. When he offered to organize the Symposium this year in Ventura—site of the memorable 2010 and 2011 annual gatherings—the Stone Foundation Governing Council approved his offer.

The SFGC does insist, however, that the event be, officially and explicitly, a STONEXUS undertaking and one for which it will take no responsibility, nor bear any liability.

Therefore, let it be known to all: INTERNATIONAL STONEWORK SYMPOSIUM 2018 is a STONEXUS Production.

Tomas is still a very active Stone Foundation member and invites ALL—past, present and future—Stone Foundation Members—as well as non-members—to come to Ventura in October for a traditional annual gathering, a Stonework Symposium, the Rocknocker’s Rendezvous. Membership not required.)

WE HOPE TO SEE YOU THERE

P.S. STONEMASONS and STONE ARTISTS from EUROPE, AFRICA, AUSTRALIA, NEW ZEALAND and ASIA are invited to come to California in October and participate in these events. In consideration of the expense of travel, your registration fees will be waived.