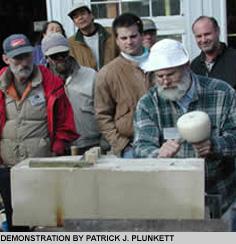 In early November more than 70 stone masons and others in related fields gathered in Santa Fe, NM to participate in the first national symposium devoted to the craft of structural stonework.

The stated objectives of the event, knowledgeable discourse, professional camaraderie and the launching of a nationwide association of stone masons and others in related fields were all manifestly achieved. The attendees, young and old, men and women, responded enthusiastically to the opportunity to socialize and discuss the craft with others who shared their interest. Many of these discussions were stimulated by a series of remarkable presentations by experts in various areas of stone work.

In order of appearance, the speakers were:

TIMOTHY SMITH, a stone mason and instructor of stone mason apprentices at the Cathedral of St. John the Divine in New York City.

VINCE LEE, Colorado architect and expert on the massive masonry of the Inka who appeared in the NOVA series, “Secrets of Lost Empires”.

PATRICK MCAFEE, a traditional Irish stone mason and author. Patrick, who presented a survey of the stone work of Ireland, also gave a demonstration of the preparation and use of traditional lime putty mortar.

PATRICK J. PLUNKETT, an English stone mason who has worked at Portland and Salisbury Cathedrals in England and the National Cathedral and the White house in Washington DC. Patrick also gave a demonstration of stone cutting techniques.

JOHN MAINE, an internationally known English stone sculptor whose public art projects are based on the principles of stone masonry.

JANE WOOLEY, a representative of the Kentucky-based Dry Stone Conservancy, a group dedicated to the preservation of dry laid stone walls and traditional walling techniques.

and TOMAS LIPPS, of Santa Fe, stone mason, designer and director of the Stone Foundation.

Affairs commenced with a convivial, informal gathering in the bar and lobby of a Santa Fe hotel the evening before registration and the scheduled sessions began… and culminated at a convivial “last supper” at a local restaurant.

The venue for the Symposium was a small but spacious theater near the center of town. On the afternoon of the second day, however, the assembly traveled north of Santa Fe to a stone yard and workshop where the demonstrations of stone cutting techniques and lime putty mortar took place. The enthusiasm with which the attendees responded to an opportunity to handle stones and tools recommended that subsequent symposiums include hands-on sessions when masons, and others, will be able to work together. On the fourth and final day an excursion was planned to the Anasazi Indian ruins at Chaco Canyon in western New Mexico, but the first snow storm of winter, a heavy one, necessitated a schedule change. The group took over the back room of a local cafe and spent the day spent the day in friendly, informal conversation about stone building and related topics.

In addition to the lively discussions stimulated by the presentations a significant portion of the Symposium was occupied with determining the function, the form, and the future of the Stone Foundation.

It was enthusiastically agreed that the Symposium should be an annual event. Tomas Lipps of Santa Fe, who conceived of and organized the event, was affirmed as the director of the Stone Foundation. A planning committee will work with him to determine the organization’s mission, structure and activities. Non-profit status will be acquired. The association will be organized into regional “chapters”. And the entire membership will serve as an unofficial advisory board, offering comments and suggestions to the planning board and director.

The principal mission of the Stone Foundation will continue to be the preservation and perpetuation of the traditions of the craft of structural stone work. It will strive to foster awareness of and appreciation for good stone work among those who might employ stone masons – architects, designers, contractors, and clients – as well as among stone masons themselves. Symposium attendees were agreed on the need, not to impose standards, but to define them and make them available.

The Stone Foundation will serve to connect and inform stone masons and others in related fields by means of the web site, stonexus magazine and events such as the Symposium. And it will nurture the network that has already begun to form; the network of which it is a nexus.

As it is a more inclusive term, STONEWORK SYMPOSIUM was a more appropriate one than STONE MASONRY SYMPOSIIUM to describe this event. Most of the attendees were stone masons -but not all. They were joined by a significant number of stone suppliers, quarriers and sculptors, of contractors, architects and landscapers, conservators and aficionados; all of who, in diverse ways, participate in this archetypal activity.

The Symposium was energized by this diversity of involvement within a shared area of interest as, hopefully, the Stone Foundation will be.

Thank you for your support of our fledgling organization.