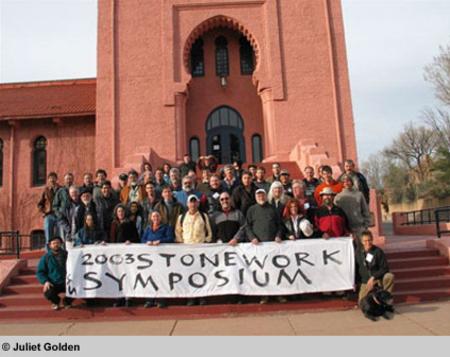 This the third in a series of annual gatherings of the stone “tribe” took place in Santa Fe, New Mexico, where it and The Stone Foundation were launched in November 2000. The hosts were the Montezuma Lodge of the Ancient and Accepted Freemasons. More than a hundred participants attended what has been described as the best symposium yet.

A cornerstone for the Stone Foundation, a cube of polished marble three foot square was provided by members from Colorado, Rock and Co. principals, Bruce Davis, Ed and Michelle Bydalek; architect, Vince Lee and Doug Bachli of Colorado Flagstone Inc. Participants brought stones from their locales and Stone Foundation members who did not attend sent stones which were to be used to construct a base for. Unfortunately a city building permit could not be obtained in time to do this during the course of the Symposium, but these materials have been stored until the appropriate place and time are determined.

ROBERT CROSSNO
structural engineer and the president of the Structural Engineers Association of New Mexico.

VINCE LEE
architect and authority on Peruvian stonework, who figured in two episodes of the NOVA series “Secrets of Lost Empires”.

RICHARD SAMMONS
architect, one of a number of “new traditionalist” architects, whose structures utilize traditional materials and techniques including load-bearing stonewalls.

DAN SNOW
dry stone waller and author of “IN THE COMPANY OF STONE”.

THE SUBJECTS OF THEIR PRESENTATIONS INCLUDED:

The Symposium culminated with a guided excursion to the Chaco Canyon Indian ruins and a hearty meal there.