But the best, or at least most joyful occurrence took place on Saturday afternoon, when, following the last presentation at the hotel, the Symposium “adjourned” to the jetty along the mighty Columbia River where Stone Foundation member, supporter and preminent Portland stone supplier, Lew Smith, had provided twelve or so tons of assorted stone to be used in the interests of creative play, to assemble and/or balance stones to form a compound whole, a more or less ephemeral assemblage of stone. 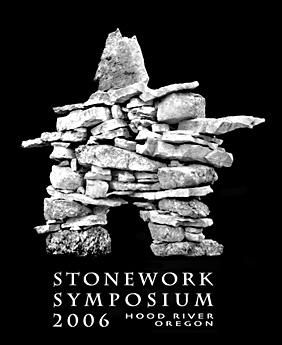 In a short time a “village” of stone “critters” had come to exist, some built, some balanced.

This event whetted the appetites of participants and witnesses alike for the beer and barbecue that followed courtesy of Heritage Rock, LLC, of Oregon City, Oregon. A grand convivial evening in a riverside park where bocce, petanque, discourse and music ensued.

Inukshuk are dry-stacked stone totemic figures built by the Inuit people of Canada and the Aleuts of Alaska. They were landmarks which helped to herd raindeer and provided companionship in a vast and lonely land.

And among many other people in other places, similar structures were erected for similar reasons, and, importantly, for creative play.

It was this latter mode that animated Symposium attendees in the gathering on the banks of the Columbia River. Here is a collection of highlights captured during the event. Beer was provided by the Stone Foundation.

This is the default gallery type template, located in:
/var/home/stonefou/stonefoundation.org/www/wp-content/plugins/nextgen-gallery/products/photocrati_nextgen/modules/nextgen_gallery_display/templates/index.php.

If you're seeing this, it's because the gallery type you selected has not provided a template of it's own.