The INTERNATIONAL DRY STONE WALLING WORKSHOP that took place In Ventura, CA January 5-10, 2011 was or­ganized by the Stone Foundation and accomplished by Stone Foundation personnel with the collaboration of Art City Studios of Ventura, the Serra Park Conservancy and a local sandstone quarry that donated more than 350 tons of material.

A retaining wall incorporating techniques of dry stone construction Indigenous to four different countries was built dur­ing the course of the workshop. Each of four skilled, experienced waller/Instructors-Sean Adcock from Wales, lluc Mir from the island of Mallorca, Spain, John Shaw Rimmington from Canada and Justin Money from Ireland-supervised the construction of a 25 foot long section section of the wall. The students, all of whom had some experience in stone construction, moved along the wall, working for some time with each instructor and learning different techniques of dry stone waifing In the process. The finished product displays an Interesting contrast of styles, the most distinct being the Mallorcan section in which the stones are not laid horizontally in a stable position, but angled against each other.

The wall that was built during the six days of the workshop was 100 feet long, eight feet tall and battered back at an angle of one foot In six. The footing Is three feet deep and five feet wide. The wall has been connected to the street by a thirty-six foot long extension built subsequent to the workshop by New Mexican stonemason Tomas Lipps with a few assistants-the US ‘sector.’ This differs from the other work in that it uses many large stones set with the aid of machin­ery. 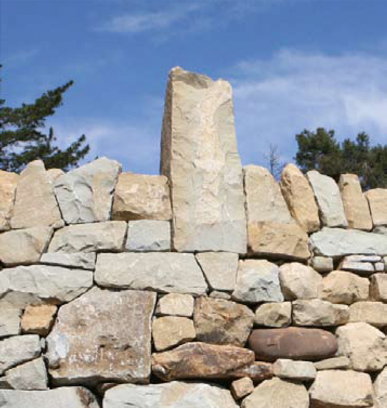 Originally the main wall was to have been six feet high, but it grew taller when the the footprint was relocated further down the slope. This was done in order to include a row of large stone bollards and a planter between the parking area and the top of the wall. The bollards and the planting area are intended to protect the top edge of the wall from vehicles In the act of parking, but they also satisfy an engineering concern-how the bearing weight of the vehicles affects the wall. The setback means that the diagonal

vector of force exerted through the soil by this weight arrives behind the base of the wall, well below grade. Unfortunately the added volume of masonry required meant that the wall’s cap could not done during the workshop.

How to cap the wall presented a problem. To do so with a course of regularly shaped capstones would have been time/cost prohibitive. Also, not enough of the material available was suitable for use as coping stones. Except for the Mallorcan section, the wall had been left with a gen­erally flat top, so many otherwise unusable stones were split with a skil-saw and wedges, leaving flat surfaces that could then be placed onto top of the wall. Unlike the rest of the wall, the bases of the (double) row of coping stones were mortared to ensure public safety. This renders the wall ‘impure’ by dry stone walling standards, but mortar­ing the capstones of structures which sustain human inter­action is good practice.

The borders of the different international sections are de­marcated by tall stones that are incorporated into the body of the wall and extend above the level of the coping. 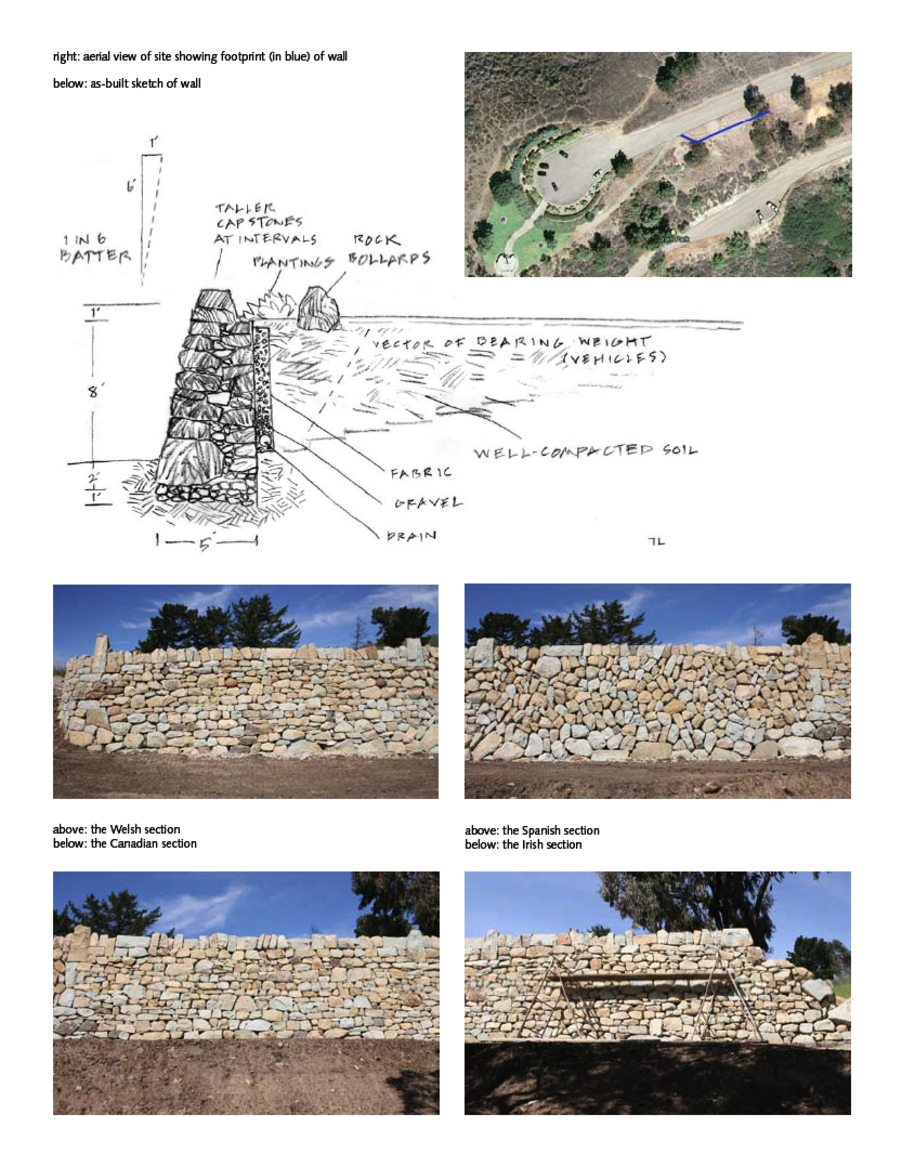